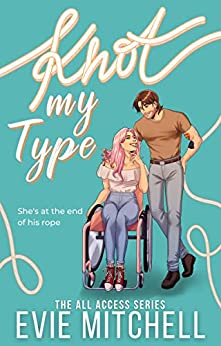 Knot My Type was an adventurous yet informative book was book that was one of my favorites from last year. Even though I read it at the end of the the year it still ended up in the the favorite column because it was the first examples I’ve ever seen of well written disabled erotica.

The book follows sexologist Frankie, our heroine who host a podcast called All Access which talks about love, sex, and relationships for the disabled community. Frankie who is a wheelchair user, and her group of friends with different disabilities including blindness and Crohn’s disease usually have the answers for her listeners questions.

But when a question comes up about shibari (rope play) Frankie is coming up blank. Until she finds out one of her close friends associates might be able to help she goes in simply for research but finds herself attracted, too bad Jay doesn’t do dating.

Jay is jaded after an older woman broke his spirit and made him believe he was no good. But he finds himself attracted to Frankie and he also finds her fitting in with his family and bolstering him emotionally. But he has a knot in his heart he doesn’t know if he can untie, will Frankie be the one to set him free from his past pain and give them both a chance at love?