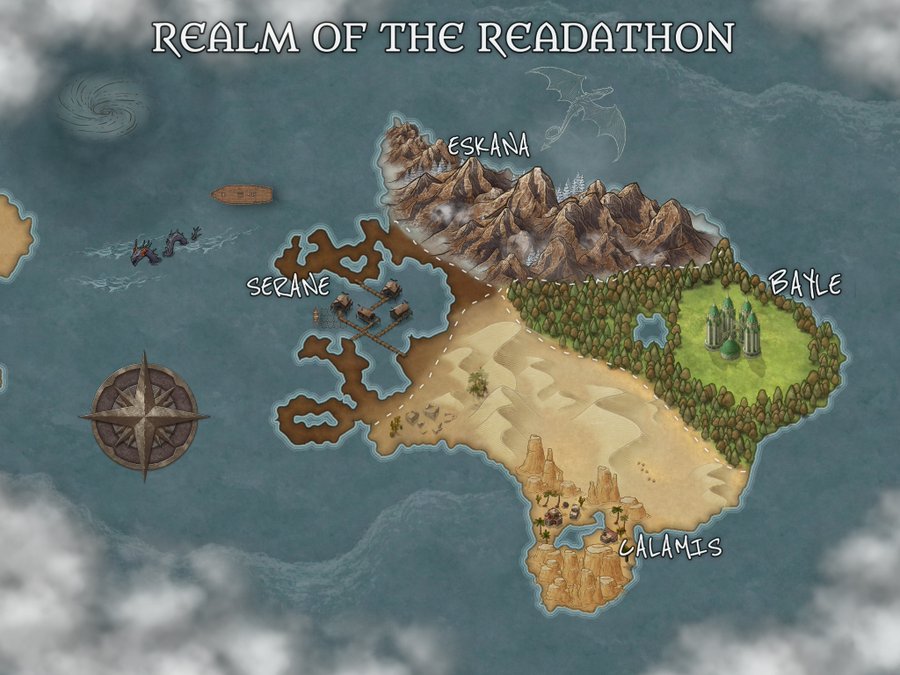 Another Readathon I’m doing called the Realm a Thon, it’s a military fantasy based readathon. But you can read lots of other types of books basically the idea is fighting for your country by reading book to add magic to your realm or take away magic from realm. You pledge magic to one of the countries. I’m pledging my magic to

I decided to pick Eskana because it was snowy and in the mountains. I like that snowy mountain atmosphere. Also the sub-prompt was polar fantasy so I figured there were a few of those on my list that I’d probably read.

For this readathon you can use up to 5 prompts for one book and they are repeatable they just have to be all negative or all positive so I see myself using a lot of the books I’m doing for Orillium here as well.

Ember and the Ice Dragons

Ember St. George is a dragon. At least she was before her adoptive father—a powerful but accident-prone Magician—turned her into a human girl to save her life.

Unfortunately, Ember’s growing tendency to burst into flames at certain temperatures—not to mention her invisible wings—is making it too dangerous for her to stay in London. The solution: ship Ember off to her aunt’s research station in frigid Antarctica.

Though eccentric Aunt Myra takes getting used to, Ember quickly feels at home in a land of ice storms, mischievous penguins, and twenty-four-hour nights. She even finds herself making friends with a girl genius called Nisha and a mysterious orphan named Moss.

Then she discovers that Antarctica is home to the Winterglass Hunt, a yearly tradition in which rare ice dragons are hunted for their jeweled scales. Furious, Ember decides to join the hunt to sabotage it from the inside.

But being an undercover dragon isn’t easy—especially among dragon hunters. Can a twelve-year-old fire dragon survive the dangers that come her way in the Antarctic wilderness and protect the ice dragons from extinction?

Amazon: Ember and the Ice Dragons

All Ekata wants is to stay alive—and the chance to prove herself as a scholar. Once Ekata’s brother is finally named heir to the dukedom of Kylma Above, there will be nothing to keep her at home with her murderous family. Not her books or her experiments, not her family’s icy castle atop a frozen lake, not even the tantalizingly close Kylma Below, a mesmerizing underwater kingdom that provides her family with magic. But just as escape is within reach, her parents and twelve siblings fall under a strange sleeping sickness, and no one can find a cure.

In the space of a single night, Ekata inherits the title of duke, her brother’s captivating warrior bride, and ever-encroaching challengers from without—and within—her ministry. Nothing has prepared Ekata for diplomacy, for war, for love . . . or for a crown she has never wanted. If Kylma Above is to survive, Ekata must seize her family’s magic and power. And if Ekata is to survive, she must quickly decide how she will wield them both.

Cold The Night, Fast the Wolves

Seventeen-year-old Sena Korhosen hates the sled race, especially after it claimed both her mothers’ lives five years ago. Alone on her frozen planet, she makes money any other way she can–until she double-crosses a local gangster.

Desperate to escape, Sena flees with his prized fighting wolf, Iska, and takes an offer from a team of scientists. They’ll pay her way off-world, on one condition–that she uses the survival skills her mothers taught her to get them to the end of the race. But the tundra is a treacherous place. When the race threatens their lives at every turn, Sena must discover whether her abilities are enough to help them survive the wild, and whether she and Iska together are strong enough to get them all out alive.

I’m sure I have some more polar fantasies I will find as I’m looking around my shelves as well as other books I want to read for this readathon that don’t fit Orillium. I’m looking forward to this readathon because it’s unlike any readathon I’ve done lately, I think it’s a very unique concept that I will enjoy and hope my nation wins.