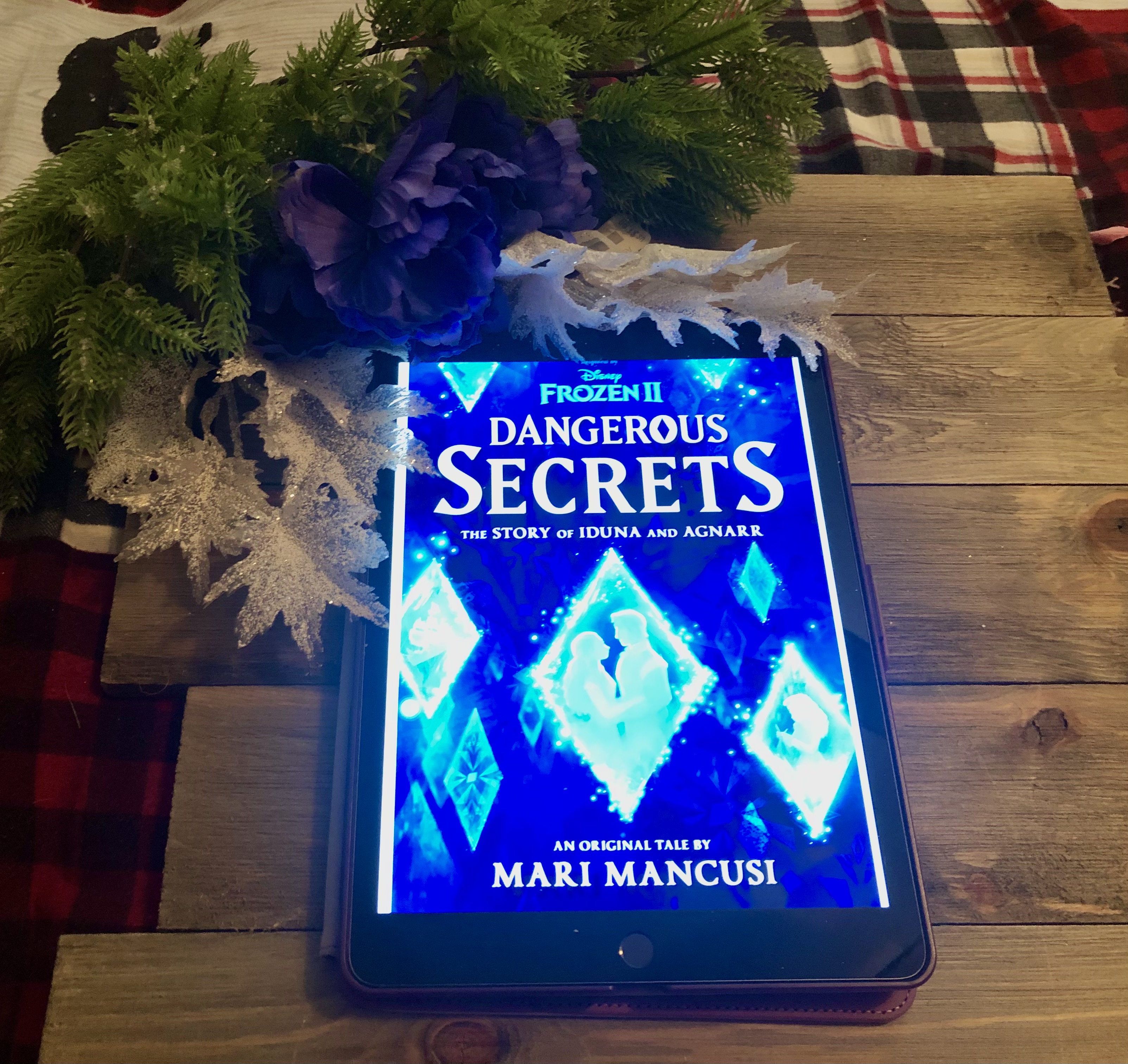 I don’t think I have to tell anyone I’m a huge Frozen fan. So any supplementary books that come along get two things from me Yay! More Frozen and can you work within the Frozen world. Basically I’m a superfan with standards, the other Frozen books I’ve reviewed here have met my standards and thankfully this one does too. Like in my woefully badly written review in Frozen Forest of Shadows, the problems and characters are believable to the Frozen world, it’s a good link Frozen to Frozen II. This book does a different job, but it does it well, it tells the story from the Battle of the Dam to when Induna and Agnarr’s ship goes down. Most of all it answers questions which any additional material book for a movie needs to do, it also makes great references but we’ll get to those later.

Frozen 2: Dangerous Secrets: The Story of Iduna and Agnarr

Sixteen-year-old Iduna has a dark secret, one that could get her killed. It doesn’t matter on the surface she an Arendellian village girl, aspiring inventor, best friend of Prince Agnarr, she’s secretly Northuldra.

Ever since the Battle of the Dam the people of Arendelle have despised and distrusted Northuldra with a vengeance. It doesn’t matter that the Northuldra, and some of Arendelle’s own have been trapped in the in Enchanted Forest behind a wall of mist that hasn’t lifted since the day of the battle.

Iduna doesn’t understand the mist, why it refuses to part or why it descended to begin with. It only clear to her that she must keep her past a secret from everyone even Agnarr, her life and maybe more depend upon it.

Fortunately Agnarr hasn’t connected the idea of Induna being the Northuldra girl he saw seemingly flying on a gust of wind, with the girl who rescued him when celebration turned to disaster.

What he does know is that Iduna is a true friend and ally in the face of his royal responsiblities which are becoming more crushing every day, between an overbearing council and a well meaning regent who is ruling in Agnarr’s place until he turns twenty one and assumes the throne.

However the two soon grow closer and realize friendship isn’t enough. With royal responsibilities on Agnarr’s shoulders, and Induna’s past chasing at her heels, will they find a way to take a chance on true love?

Not only was this book good, it was cute. You can see where Anna and Elsa’s personalities came from via there parents, you can also see the way the intergenerational trauma that is dealt with in Frozen II has its roots here. Agnarr is a lot like Elsa even learn that ‘Conceal, Don’t Feel’ was something he did to himself and probably learned from his father. The story about Agnarr’s mother and the trolls, ugh right in the heart. This book makes Iduna and Agnarr’s choices in Frozen make sense.

I also love the small little jokes with the songs, they aren’t necessary but they are great jokes for the fans. I hope if there are more opportunities to write more additional material that we will see more, but for now I’m happy to see everything is high quality and wonderful to read.

Amazon: Frozen 2: Dangerous Secrets: The Story of Iduna and Agnarr