As someone who is a fan of #OwnVoices works, I’d like to take a look at the most recent data on diversity about children’s books. I’ll do another post on YA if I can find the resources but right now I’d like to focus on children’s literature. A lot of this data is coming from the Cooperative Children’s Book Center at the University of Wisconson-Madison. So a shoutout to them.

Take a look at the graphic below. You may have already seen it, this is the distribution of protagonists from 2018 books. Dismal isn’t it? 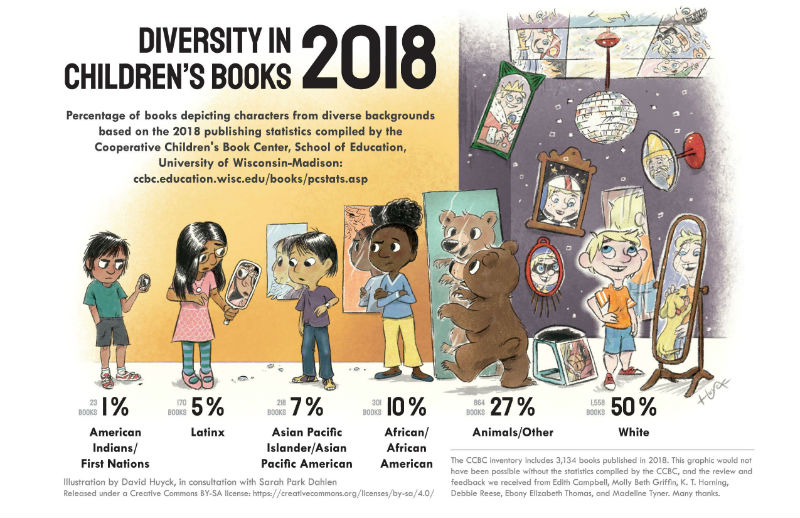 It has improved from the 2015 survey, but hardly, 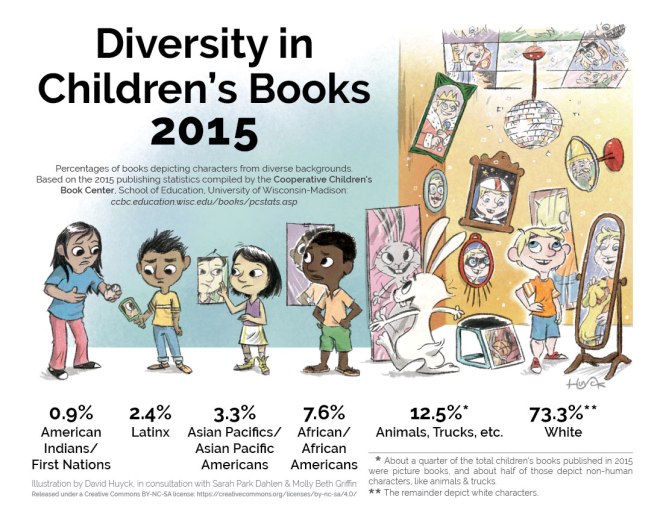 As you see white protagonists have gone down, but animal protagonists have gone up? I’m going to do a post about that in the future. This survey doesn’t even take into account who is writing these books, just the protagonists themselves. So #OwnVoices authors aren’t represented. For more about the Own Voices hashtag and what it means, please visit its creator’s website at http://www.corinneduyvis.net/ownvoices/  .  Basically, it means that the author and the protagonist share some aspects of personal identity.

This is where two other graphics from Reflection Press really hit home. These graphs also specifically focus on children’s literature.

The first shows how many books are written by #ownvoices authors in reflection to what percentage of the population that ethnicity makes up. As we see White Americans have more than their fair share and everything goes down from there. Across the different categories, at least 1421 books would need to be written by Indigenous and POC authors to make up for the gap when it comes to books written by each segment of the population.

The graph has a few problems, that it notes, such as the fact that multi-ethnic authors aren’t tracked separately. But overall it is a good representation to show how much would need to be written to make up for the lack of books published by #ownvoices authors. There are, of course, many additional factors at play, the first and most important being racism in the publishing industry. It is all well and good to say the stories are needed but authors getting their stories accepted, especially multiple authors of color, continues to be a problem.

The second graph goes more into this problem, showing the books received (accepted) by US and non-US publishers.

Showing 2015-2017 this graph shows that more books about POC and LGBTQIA protagonists were being accepted, but by and large, they weren’t being written by #ownvoices authors. Instead, the books that were accepted were written by people outside the given community. This again works into the racism of the publishing community as well as the white author’s privilege when it comes to getting published.

As they note on the graph there were more books written about Indigenous/POC/LGBTQIA protagonists (3700 books) across this three year period. However, nearly 700 of those were written by people outside of the given communities.  Meanwhile, there were only 550 books written by Indigenous and POC writers in total in 2017.

So what does a blogger do about these depressing numbers? Use your privilege to uplift and highlight #ownvoices authors as well as the work of Black, Latinx, POC, Indigenous and LGBTQ authors in general. That’s what I’m going to try to do here. I’m still finding my voice with this blog, but my goal isn’t to just use it as space for me, but a space to uplift others.