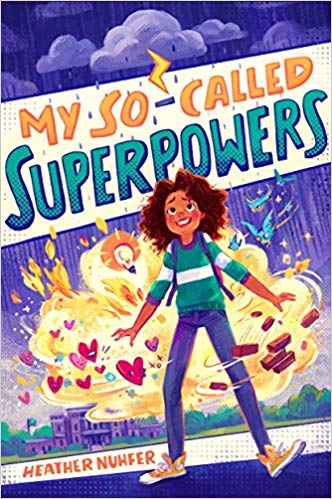 Summer is Marvel movie season. I don’t know about you all but I love the Marvel Cinematic Universe. It is fun, So I love Marvel movies, Captain Marvel is my favorite but I like the whole universe. I could talk for hours about my problems with its representation, but instead, I’ll recommend books that are better. And wait and hope they don’t ruin the Black Widow movie. 🙁

Even Superheroes Have Bad Days

Helpful for kids learning emotional awareness (and adults too!) Even Superheroes Have Bad Days deals with healthy coping mechanisms for when superheroes and children are feeling overwhelmed.

Amazon: Even Superheroes Have Bad Days

Mia Mayhem Is a Superhero!

Mia Macarooney is just a normal eight year old until she finds out she has superpowers! She is soon invited to join an afterschool training program for superheroes, the Program for In-Training Superheroes a.k.a. THE PITS! Now she has to find out if she’s up to the challenge of balancing her life and her secret identity and being the world’s newest superhero.

The author has also written sequels including Mia Mayhem Learns to Fly, and Mia Mayhem Fights a Super Bully.

Amazon: Mia Mayhem is a Superhero

Veronica McGowan just wants to be parts of the cool group of kids at school. She wants something that makes her different. She gets her wish when she suddenly develops superpowers or what she calls ‘stupidpowers’.

Her strongest emotions come to life for her school to see, everything from belching fire when she’s angry, to hearts popping up above her head when she’s thinking about her crush.

Now she and her best friend Charlie must solve the mystery behind her powers before she embarrasses herself in front of the entire school.

In a family full of heroes that receive their powers after their 12th birthday. At almost 12 years old Rafter Bailey and his brother Benny are excited to get their superpowers. But when their powers turn out to be duds, they must find a way to still help their family against their enemies the Johnsons.

But as they get to know Rafter’s algebra class rival  Juanita Johnson, the two boys realize what they know about heroes and villains might not be the truth after all. Teaming up with Juanita, they put aside their differences and search for the truth and try to make things right.

What other children’s and middle-grade books about superheroes, or hopefully heroines, have you read recently?