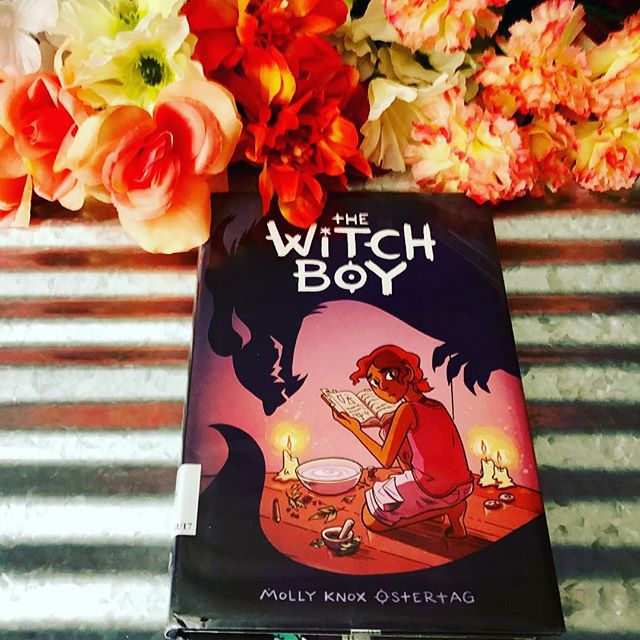 MINOR SPOILERS AHEAD
I recently finished The Witch Boy by Molly Knox Ostertag and I can’t help but give it glowing reviews. Before I even get to the plot, it’s simply a beautiful book. Every character’s art is distinct, even the names seem to have a deeper meaning. It’s a world, despite having scary points in the story, that you want to jump into and chill out in.

As for the overall plot, it is well paced and keeps tension throughout the story. There is also a good twist ending that I saw coming but I won’t spoil. Even though I saw it coming I still enjoyed it.

Ostertag gives the characters heart and makes you feel for them. You definitely get a sense of their personalities even though you just meet some of them for a few pages.

The story itself is about Aster who comes from a family of witches and shapeshifters. These roles are gender-based are girls are witches and boys are shapeshifters. Yet deep down Aster knows he’s a witch. Despite his family’s disapproval of his interest in witchery. Aster tries to pick up what he can of witchery by overhearing lessons and trying out techniques in secret.

All the while he keeps his head down as the pressure to become a shapeshifter like his father, uncles, and cousins continue to mount. On a special night when he’s supposed to find the first animal form, he’s supposed to be able to shapeshift into. Something strange happens to one of his cousins

Soon the boys from his family start disappearing and the witches can’t find a solution.

Will Aster and his new friend Charlie be able to help where others can’t? Are they the ones who can face an old family enemy and live to tell the tale.

It was adorable. The two bonded over berries and gender expectations. Even though Charlie doesn’t get enough page time in this volume, she’s a standout. She helps Aster see a side of himself he’s not expecting and doesn’t think his being a witch is odd. They are great equals, in the way that they are both outcasts.

She provides a great ‘real’ world perspective to Aster’s mystical family. She also helps him piece together some difficult problems about what is expected of him. But far from being just a helper, she has a very useful ball bat.

Though she gets far more page time in the second book, her last couple of pages with Aster in this book make her worthy of a nod. Also, the fact she has a peg leg and I think is purposefully calling everyone by the wrong name.

I’d recommend this book probably to a middle-grade audience. Probably 8-12. I’d totally read it again. It’s a great story about defying what is expected of you, being who you are really meant to be. It’s especially important for youth from unsupportive families.

Though the cast is diverse, Aster and some of his cousins are mixed race. Charlie is black. Charlie also has two dads and some of Aster’s cousins have two moms. All of this seems to be just seems to be in the background to Aster’s gender role issue. I can understand this, but I would have liked at least a nod to some of the other issues.

This book deserves 4.5 stars, it’s well paced, I love character relationships, and the art is fantastic. Also, I’d totally re-read it. I think it’s going to be one of my favorites this year.

2 thoughts on “The Witch Boy Review”